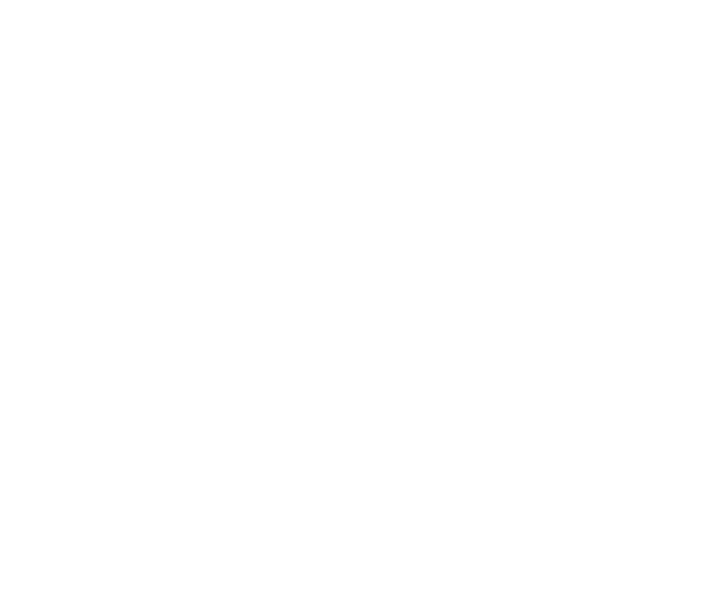 Nautilus Restaurant is nestled into Island Point Hill in picturesque Port Douglas amid a beautiful lush tropical garden setting with palms overhead. Guests enter along a hidden pathway from the main street of the Port Douglas village, to discover a breathtaking restaurant that is like stepping into another world.

The menu focuses on fresh, locally sourced produce, sensational flavours and perfectly paired wines to match. Select from the a la carte menu or indulge in the full taste experience with a Nautilus degustation.

From the oasis-like setting through to the friendly and attentive staff, and stars shining overhead, the relaxed dining atmosphere embodies a special ‘Nautilus feeling’ that is in total harmony with diners’ tropical holiday mode.

Established for over 65 years – and having served the likes of Mick Jagger, Rod Stewart, Bill and Hillary Clinton, David Bowie, Gough Whitlam and Paul Hogan – Nautilus has taken on an iconic status, named as a must-do when in Port Douglas.

Join us to experience for yourself the beauty of dining under the palms at Nautilus. 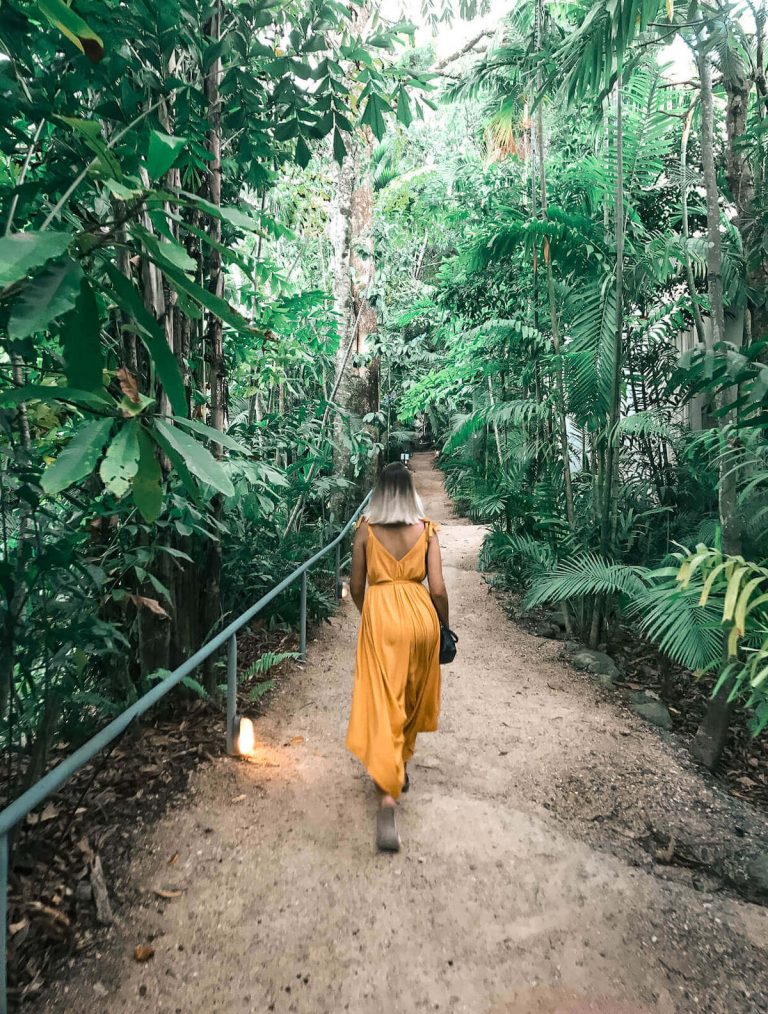 Walk the hidden pathway that leads to Nautilus 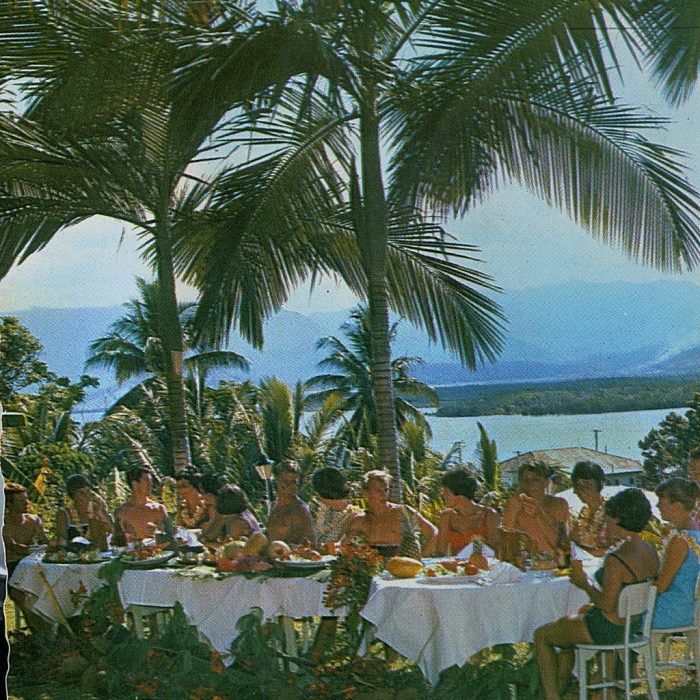 Since first opening its doors in 1954, Nautilus has seen Port Douglas transform from its sleepy fishing town origins to a blissful paradise people escape to.

We lived through the excess of the 80’s, the years when Port Douglas was dubbed a “millionaire’s playground”, the quiet times, and all that’s in-between.

With over 65 years of continuous operation on the same site, Nautilus remains the iconic restaurant of Tropical North Queensland with a colourful history rivalled by few Australian restaurants.

The story begins with Max & Diana Bowden who arrived in Australia in the early 1950’s. Max had been an agent in Her Majesty’s Secret Service, and had come to Australia seeking to start a new life away from the United Kingdom.

His new wife Diana, an elegant and very attractive lady, was first cousin to Queen Elizabeth II. This intriguing pair found Port Douglas, fell in love with the natural beauty of the tropical paradise, and took up residence.

They purchased most of the property bounded by Macrossan, Murphy, Grant and Wharf Street; basically the whole side of flagstaff hill that included the current Nautilus Restaurant site. Max planted an orchard and Diana designed exquisite shell jewellery that she sold to department stores in Sydney and Melbourne, and exported to London. The beautiful jewellery was very popular and so a great number of people began journeying to Port Douglas specifically to buy direct from the factory.

Whilst there were plenty of pubs in town at the time, there were no restaurants. Max & Di realised the opportunity to supplement their living and began serving morning tea, lunch and afternoon tea. And so in 1954 Nautilus Restaurant was born.

The Bowdens operated Nautilus themselves for about 4 years before offering the lease to Bart Allen who had arrived in Port Douglas seeking to run a restaurant. 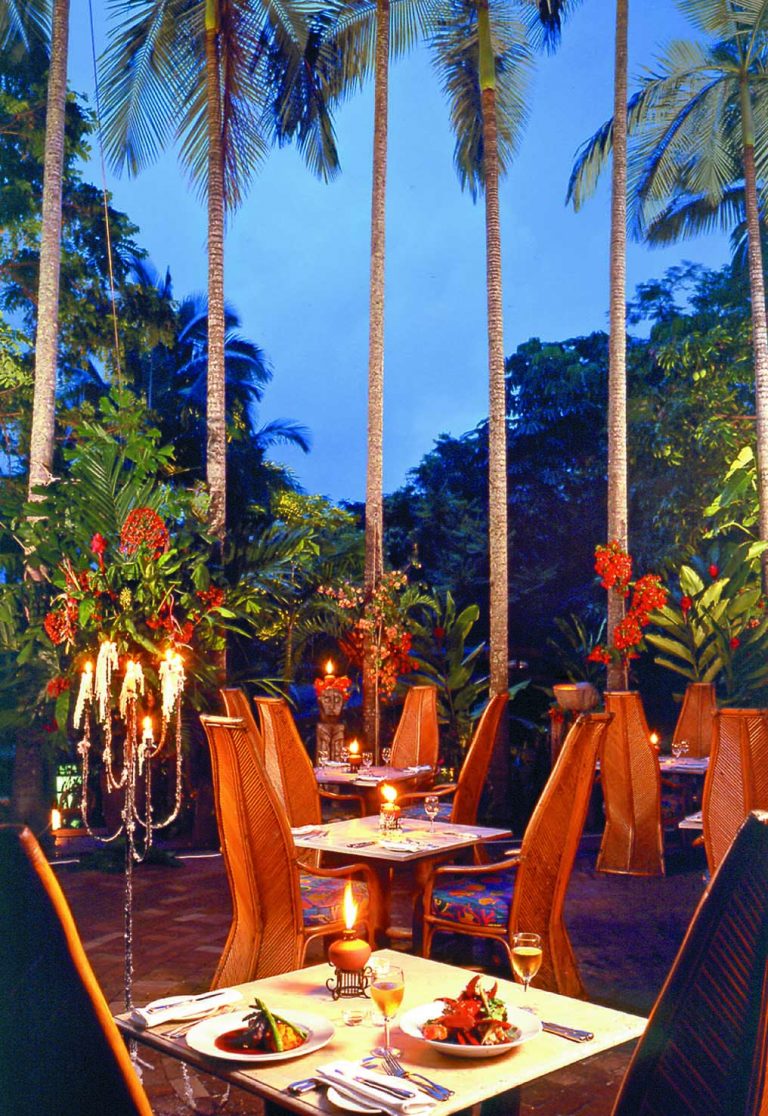 An original postcard showcasing the beauty of dining in the paved Nautilus Courtyard.

A number of restaurateurs then followed with varying levels of success. Perhaps the most accomplished in this period were partners John Haywood and Bill Austin who took over the lease in 1971. The pair had a theatrical background and focused on a provincial style menu sourcing most of their produce from the surrounding region, and even grew their own fruit and vegetables. A large fishing fleet operated out of Port Douglas at this time and fresh reef fish including coral trout were readily available. 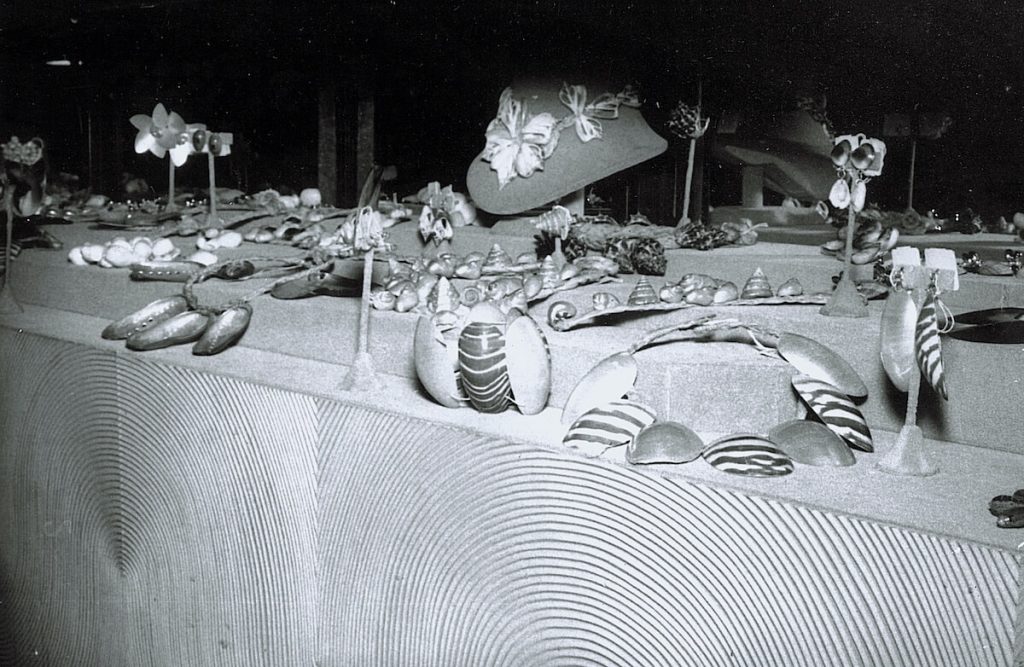 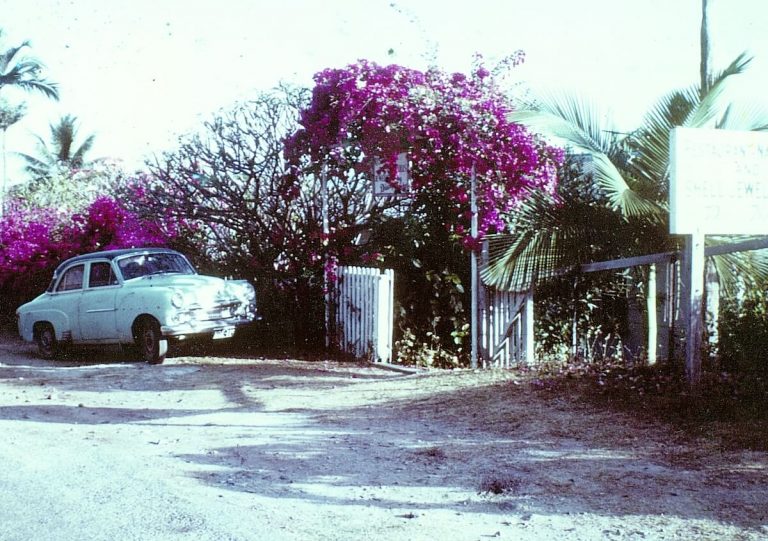 In 1980 ownership of the restaurant freehold and operation changed when the Bowdens sold the property to their close friends Dianne Cilento and Anthony Sheaffer. Dianne had enjoyed celebrity status in the 60’s and 70’s with a successful film and stage career, and a marriage to Sean Connery while he was starring as the first James Bond.

Dianne had moved to Port with Tony a couple of years earlier to purchase the property that is now Karnak Play House. Di & Tony’s background in theatre saw the Restaurant further develop its theatrical demeanour in the early 80’s.

This was a decade of excesses, & Nautilus surely held its own in all things decadent, as everybody who was anybody visited.

In 1984 the restaurant celebrated its 30th birthday with the biggest bash Port Douglas had ever seen with Premier Joh Bjelke-Peterson opening the festivities.

Sunday lunches were the biggest event of the week for Nautilus. Each week a guest ‘Celebrity Chef’ would nominate their best dishes and people from the surrounding areas, including Cairns, would arrive to dine at the restaurant.

The antiquated Queensland licensing restrictions at this time meant that the pubs could not serve liquor after a certain time of day. Nautilus somehow managed to keep the drinks flowing for these luncheons as they continued into the night, without being raided by the local police.

In 1986 Diane persuaded chef Mogens Bay Esbensen to leave his restaurant in Sydney and come to Nautilus. Mogens had owned a restaurant in Thailand and his ability to combine tropical ingredients with Thai flavours pioneered what is now considered Modern Australian Cuisine. During his time running Nautilus, Mogens operated cooking schools at the restaurant.

When Mogens returned to Sydney in 1989 to open his next restaurant ‘Butlers’, the Nautilus lease was taken over by Gold Coast restaurateurs John and Carmel Forest.

Later that year the restaurant property was sold by Di & Tony to the Wearne family consisting of Warren & Narelle, Grahame & Jeanette and Duncan & Janice. The family appointed Carmel as manager and the good times continued. Warren had been a successful restaurateur in Sydney and the Gold Coast, running Elizas at Double Bay, Oatlands House at Dundas and Oskars on the Gold Coast. With his wife Narelle he operated Nautilus until sadly he passed away in 1996. 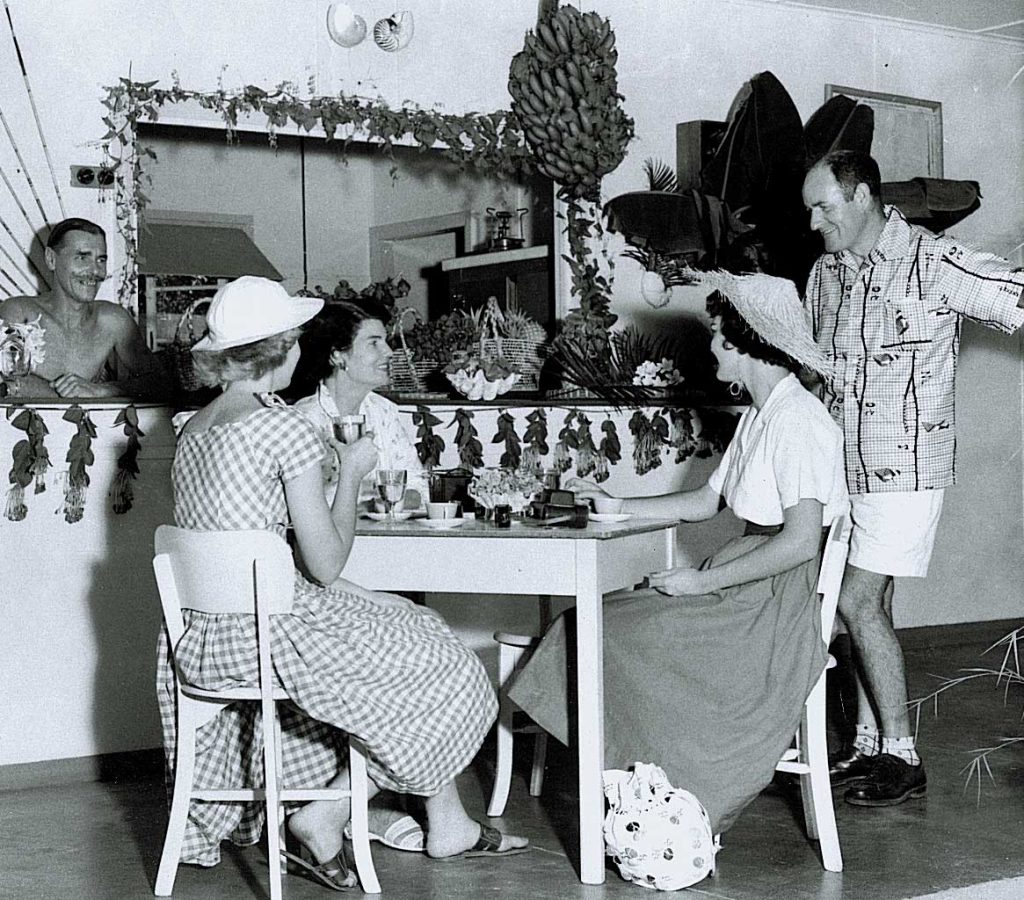 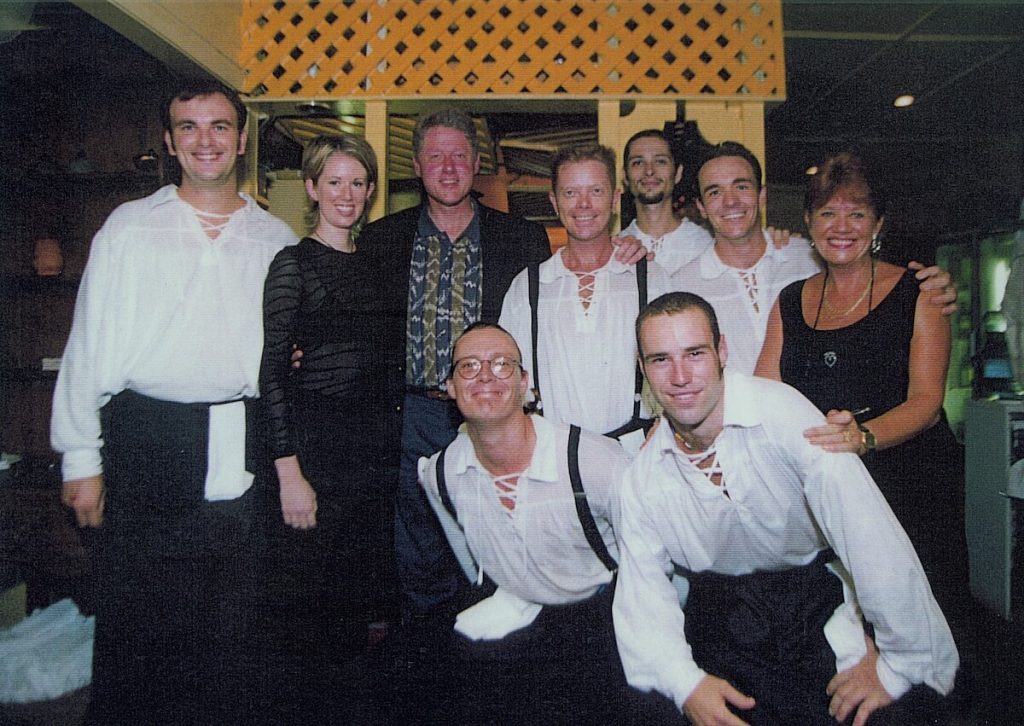 US presidential visit of Bill & Hillary Clinton in October 1996

Cemented in the history of Nautilus is the US presidential visit of Bill & Hillary Clinton in October 1996. One night at around 8:40 pm, with no prior reservation, and two small tables of “minders” already dining in the restaurant, two of the Clintons’ senior security officers entered the restaurant and spoke with Carmel.

The secret service men advised her that all of the restaurant’s telephones had been disconnected and that the President and First Lady would be arriving to dine in 10 minutes. No diners then present in the restaurant were allowed to leave. Hillary had seen a feature on Nautilus in the New York Times and she had included a romantic anniversary dinner at Nautilus in their holiday plans.

The restaurant was sealed off, Murphy Street was blocked at both ends and officers were stationed at all points including the kitchen. The Clintons dined alone and enjoyed their own intimate “Nautilus Experience”.

There was a small wedding party in the restaurant that night. Bill signed their wedding certificate and the bride presented her bouquet to Hillary for her wedding anniversary. 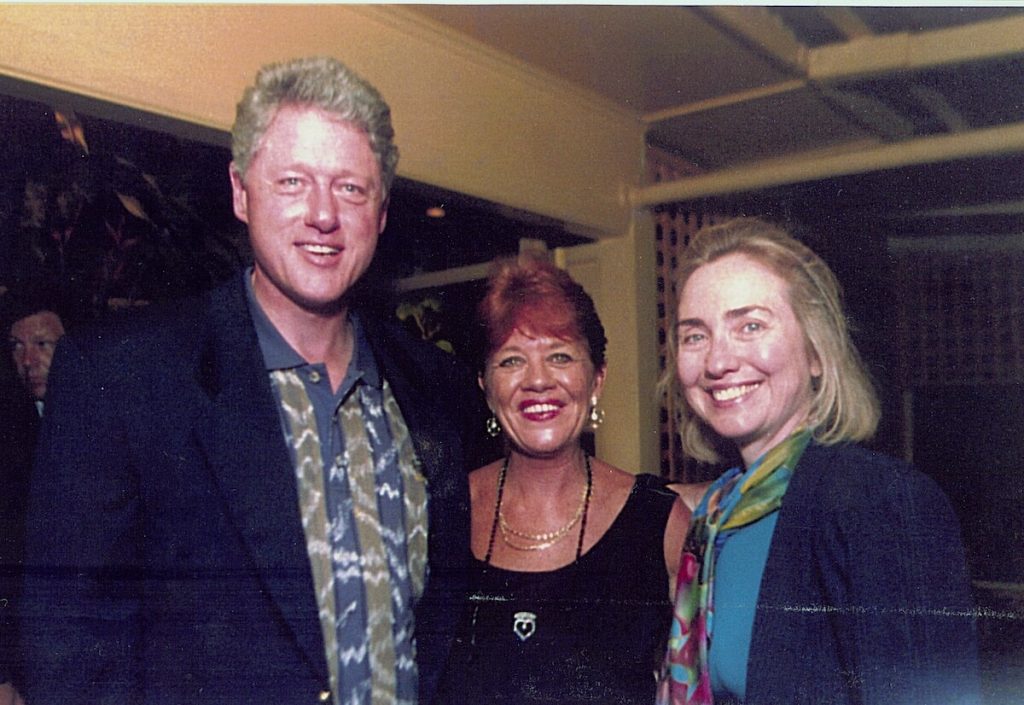 After his brother’s passing, Grahame and his wife Jeanette took over Warren’s family interest in the restaurant. The couple made many sojourns from Sydney to enjoy Nautilus and Port Douglas, often bringing their young daughter Raechel-Skye. Grahame & Jeanette moved to Port permanently in 2001 and now own and operate the restaurant outright, having acquired the remaining interest in 2004.

Grateful for the many chefs, waiters, managers and visitors who have helped to craft the vibrant history of this iconic restaurant, it is hoped Nautilus will continue to delight patrons with its truly unique dining experience for many more years to come.

CLOSED FOR ANNUAL BREAK FROM JAN 23 UNTIL FEB 16

Matthew Sayre
Read More
Simply amazing food and service. I recommend the 5 course menu.
Ben Fermaner
Read More
A dream location with great food, a must do if you are heading to Port Douglas - you will not be disappointed.
Emma Gill
Read More
A must visit when in Port Douglas. The ultimate dining in the rain forest experience, with delicious food. We had the set menu for four, and the service was excellent.
Previous
Next

Stay up to date

Enter your details to receive all the latest news from Nautilus 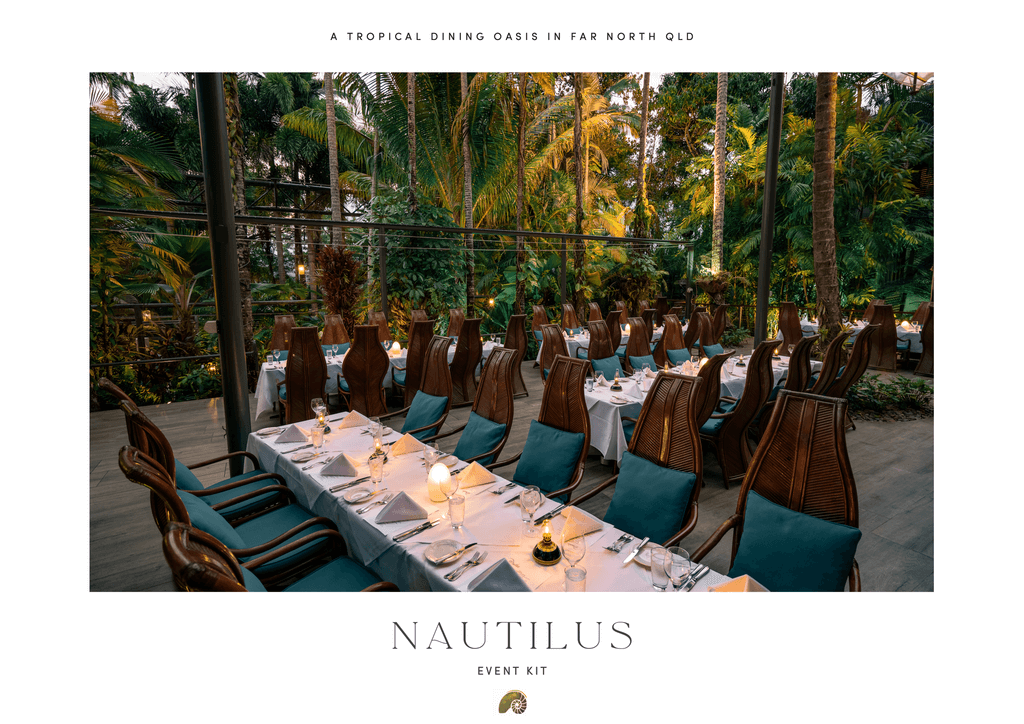 Enter your details to download our Nautilus Event Kit 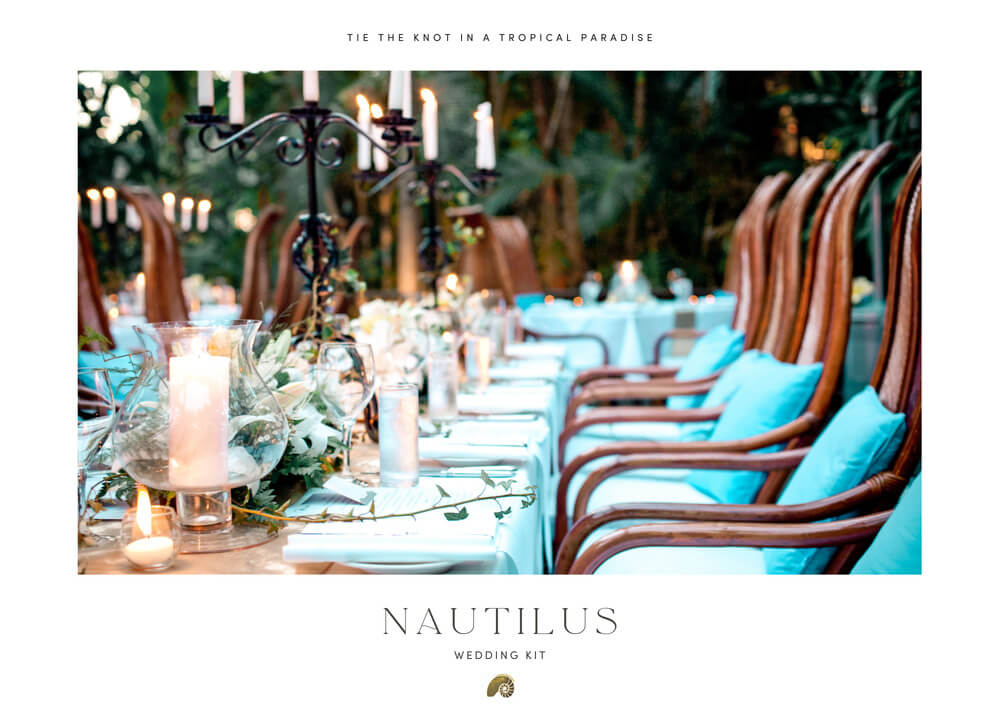 Enter your details to download our Nautilus Wedding Kit